Annie is an Aruban dog, a year old, that was abandoned at the beach by the junkyard dump, like many others on that island nation. Tossed away like garbage, she was left to fend for herself to find shelter, food & learn how to survive a life on the streets. Even though Annie was homeless, she was still very approachable and sweet. She melted my heart with her brown eyes and I could instantly tell she had a beautiful spirit that just wanted a family of her own and to be loved. It broke my heart to see her out there looking for food scraps at the dump. 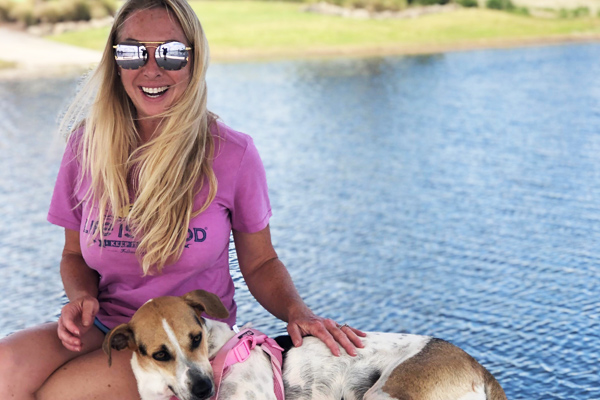 I call this a love story, because on a romantic vacation with my husband on Valentine’s weekend in Aruba from Florida, I stumbled upon Annie and her pack. Annie and I instantly connected and I knew from that moment there was no turning back. I met a kind Aruban man named Miguel who was there every few days checking on the dogs on his own time bringing bags of dog food using his own money. He was giving them the love and affection that they so desperately needed. Through this connection, I met a woman named Gina who has brought 300 dogs to the U.S. with money out of her own pocket. Working together, we got Annie off the streets into a doggie hotel until the flight restrictions were lifted and Annie could board a cargo flight back to the States. This process took a month. The anticipation of Annie’s arrival n Florida grew stronger and stronger. Miguel had been so kind to take Annie to the vet for a check-up and shots and to get the certification she needed to travel to the U.S. He asked for nothing in return.

During my trip to Aruba, I stayed with some friends in a family home near where the dogs wandered. Every night for 3 nights Annie would sleep on the porch waiting for me to wake up. Her beautiful brown eyes would light up and greet me when she saw me. As I went out to explore the island, she would be there faithfully awaiting my return as though she already belonged to me. Then the weekend came to an end and I had to say my good-bye to Annie on Valentine’s Day. I looked at her, gave her a pat on the head and said I’m sending for you — hang on just a little longer. As we pulled away in the jeep she ran as fast as she could, chasing the jeep to the end of the busy road as though she knew it was good-bye. Tears rolled down my face and I could barely speak. My heart was shattered into a million pieces. It was then I knew I would never give up on getting Annie off the island and to the U.S. My eyes had been opened. There are so many more dogs like Annie, including her pack that she would leave behind. This is why I feel compelled to raise awareness and make a difference with God’s direction and guidance.

As I boarded my flight & looked out the window over the big ocean, my heart sank into my chest and I was overwhelmed with grief, feeling so hopeless and desperate — probably the same way Annie feet every day she woke up on the streets. I will pray every day until we are reunited. This is how Annie’s Faith Foundation was inspired. 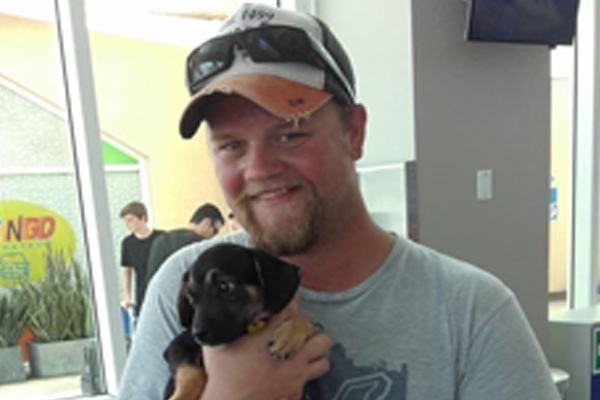 Working with ARF, Aruba’s Relief Foundation and Sgt. Peppers Dog Rescue we were able to board Annie in a doggie hotel until we could book her a flight. We had to watch for temperatures in both Aruba & Florida because of the temperature restrictions. It was a tumultuous journey. The temperatures were rising and her flight was pushed back several times. On pins and needles, we didn’t know if they were going to cancel her flight. Finally, we got word that the aircraft was in the air. She had cleared customs in Aruba and now we just had to make sure she would clear customs in Miami. We drove from Palm Beach to Miami to pick her up that Thursday evening. But because her flight was pushed back and because of Covid restrictions, Customs was closed and Annie had to stay in Miami for the night. The customs agents instructed us to go home and come back the next morning to have her paperwork stamped before she could be released to us. So thanks to the pet limo in Miami, she was cared for that night. It was a long night and all I remember is that my tears were flowing and so the Customs agent let me catch a glimpse of her in her crate in the warehouse. We didn’t get home until after 11 PM and it was hard to sleep that night  We woke up, left the house by 7 AM and got to Customs where they were waiting for us. We quickly got Annie‘s paperwork stamped. Everybody from the Customs office knew who we were, and they cheered us on. We were reunited with Annie and it was one of the most magical moments that I can remember.

Annie has been home since May, acclimating to her new life. She enjoys her time on the ranch, long walks, chasing rabbits and sleeping on cozy blankets.

Because of this extremely emotional and wonderful experience, it has been my mission to rescue dogs and bring them to the U.S. so they can bless other homes as Annie has blessed ours.